In order to facilitate your independent walks in Havana we have prepared for you a map with the best city walking trips that you can make starting from the house. Just follow the lines in different colors and the explanations on our map and you will be able to discover by your self the best parts of Havana.
Print from our web site. 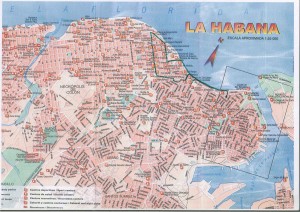 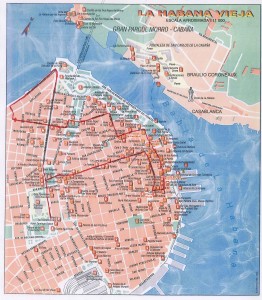 This tour will show you the most important parts of Vedado-one of the first, but not last expansions of Havana occupying the once green and forbidden spaces, where the name Vedado actually comes from.

From your House turn right and right again and go to Malecon.
On Malecon continue left, direction Vedado.
First you pass Hotel Deauville on Galiano where you can exchange money, check you email, or use the swimming pool. There is a good nightclub there too.
In the evening if you continue down Galiano on the fifth corner on the traffic light, on the left you can go to dance salsa and listen live music in Casa De la Musica.

But for now just continue down Malecon enjoying the architecture along the street with old and many new buildings appearing here. Next you can see is Parque Maceo where there is a big hospital Hermanos Ameijeiras. At the end of the park there is a little club called La Pampa with kind of commercial rap music.

From Malecon take San Lazaro down till Aramburu, where turn on the left to street called Callejon de Hammel, which hosts a famous open air artistic center with rumba, salsa and many artistic events.
Go back to San Lazaro and continue your walk until you reach The Havana University, which is worth seeing.
From there take L and soon you arrive on 23 and L, which is considered the most centrically corner in Havana.

On one corner here is the ice cream Palace-Coppelia, on the other corner-Cine Yara, where first screenings of new movies and festivals happen.
Here is also Habana Libre hotel, which used to be Havana Hilton before the revolution.

From here continue down L for 8 blocks until you reach Calzada, just before Malecon. On L you can see many beautiful and weathy American style houses build after the 40-ies as well as some Art Deco houses.

On L and Calzada you will see the American Embassy, which operates fully since recently, and before it was an Interest Section. There is installation of lots of pylons for Cuban flags in front of the Embassy where there were a lot of protests being organized by the Cuban government, the so called Tribuna Antiimperialista.

After that you go back on Calzada and cross Piragua which is the place for the most important concerts in Havana. Calzada continues into O, which will lead you to the famous National Hotel /Hotel Nacional/where it is nice to enjoy an acceptable Mojito in the graden and much more acceptable view of Malecon.

Then you continue O again until you reach 23 and turn left till Malecon.
23 and Malecon is the most popular meeting point for gay society in the evenings.
From here take a taxi, or come back home by foot if you still have energy… 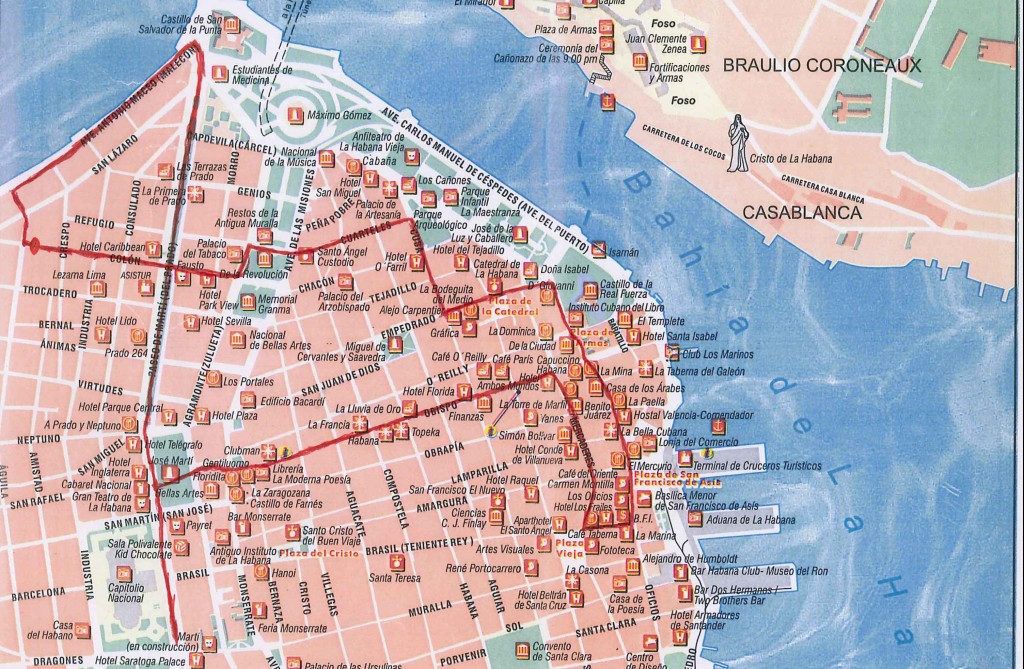 This is the daily trip, which can show you Havana Vieja /Old Havana/, it’s most famous squares, Capitoio, Gran Theatre, Prado and part of Malecon.

Go out of the house and keep left on Colon.
The fourth street you cross is Prado.
This is the middle of Prado and the only place where you can see four lions together.
Later you will see the whole Paseo del Prado, so for now just cross and continue.

You have two more streets to cross and this is the end of Colon. From here you can turn right to see the Museum of fine Arts presenting the best of the Cuban Art, or turn left to see the Presidential Palace (currently The Museum of the Revolution) and the beautiful park-13 de Marzo in front of it.

You continue along Cuarteles to see the Santo Angel Church and the little square with the same name, which may look to you as many other little squares you have seen in Europe.
Continue down Cuarteles until you reach Cuba. Here you will see Parque Arqueologico with remains of the wall which was surrounding Havana to protect the city by pirates and corsairs. Here is the police station which is occupying the building of an ex beautiful castle.

Turn right on Cuba. On the first corner it is worth seeing hotel O’Farril. On the third corner turn left on Empedrado and you will see the famous Bodegida Del Medio, which was one of the most favorite places of Hemingway to drink his mojitos. Continuing straight you will see the Cathedral de la Habana on Plaza De la Cathedral.

Continue straight Empedrado until you reach Tacon and turn right and you finish at Plaza des Armas, which is very alive with booksellers and performers. Here is Instituto Cubano del Libro, Castillo de la Real Fuerza, Hotel Santa Isabel, which is very nice to see inside, the Museum of Natural Sciences where you can see the flora and fauna of Cuba. The museum of Palacio de los Capitanes Generales will show the lifestyle of all Governors of Havana.

Continue on Oficios and you will get to the next square San Franzisco de Asis, with the Basilica with the same name where there is a music hall especially dedicated to chamber music.
Continue Oficios and on the next corner on Teniente Rey /Brazil/ turn right, continue and on the next corner you will reach Plaza Vieja, which is full of cafes, restaurants, exhibitions of modern Cuban artists and one mirador-best view on the corner with Mercaderes where you can enjoy very beautiful view of the city from the highest floor of the building which is located on the corner.

Once you have enjoyed the beauty of this square continue your walk on Mercaderes /where you can find the famous Chocolate House where you can taste one of the finest Cuban chocolates/ till Obispo. Here you will see Hotel Ambos Mundos, where Hemingway used to sleep, Café Paris with live music in the evening, Hotel Florida with nice architecture and live concerts at night, The Feria where you can buy hand made pieces of local artists, the cadecas-money exchange points and bancs where you can change money, the Big Library – La Moderna Poesia and at the end you finish at La Floridita-the other favorite place for Hemingway to hang with the best Daiquiris produced in Cuba.

The little square after Obispo hosts The Museum of International Arts on the left and one of the newest hotels being build at the moment, which used to be a school before the revolution.
When you cross the street you will reach Central Park with many hotels surrounding it-Central Park with a swimming pool on the roof, Hotel Plaza, Hotel Telegrafo In all of them you can use internet. We suggest that you go on top of Inglaterra hotel where you can have the best view of this pat of the city.

The most remarkable building on Paseo del Prado of course is the Gran Theatre, which hosts the National Cuban Ballet and the International Ballet Festival of Havana, which are one of the best in the world. The other emblematic building is the Capitolio, which is a copy of the Capitol in Washington. Here is also the Pairet cinema, which hosts some international movie festivals.

Down to Prado on the corner with Neptuno you can take the shared collective taxis for locals-the old Cadillacs, Chevrolets, Oldsmobiles from the 50ies and they would drive you to Vedado for 50 cents or further for 1 CUC.

Continuing down on Prado, the first building on the left there is the Andaluz society with a lot of Spanish culture activities. On the right there is another Spanish society building Asturiana with a nice restaurant and a nightclub on top.

A few meters down on the left there is the Palacio de los Matrimonios /The Marriage Palace/-go inside and see the splendid hall from Spanish times! In front is the Sevilla hotel, which you need to see inside and which has a swimming pool too.

Just in front of Sevilla there is the National ballet school, which prepared many famous names in ballet.
On the other side is the newly opened Alliance Frances in an equally beautiful building.
Another new big hotel is being built on the right. In front of it there is Las Terazas Del Prado, where you can stop for a drink.

Parque de los Enamorados is at the end of Prado and here you reach the famous Malecon. Cross Malecon and from La Punta you can enjoy one of the most beautiful views of Havana, seeing the Morro-the Castle of the 3 princes, the Bay, and the whole seacoast of Malecon up to Vedado on sunset. If you are there at 21h. you are going to hear El Canonazo de las 9- one of the most ancient traditions of the city-the cannonry which during the Spanish Colonial times were announcing that the city doors are getting closed and no body can come after that during the in this way protecting the city from pirates and corsairs.
Two blocks down, direction to your house, on Malecon and Genio there is a nice restaurant Sociedad Asturiana Castropol, where you can have a nice dinner after the long walk.
Than walk two more blocks down Malecon turn left on Aguila and the second corner on the left is your house. Good night!